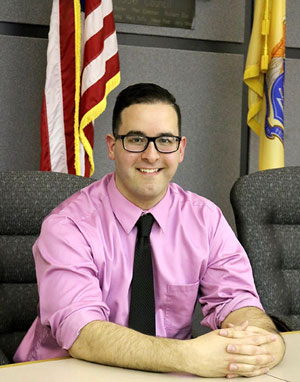 Cody was born on December 12, 1990. He is a proud 2009 graduate of Williamstown High School. Cody was elected as the youngest Councilperson in the township’s history at age 23. He works as the Director of the Foundation and Alumni Relations at Rowan College at Gloucester County, is a political consultant, and serves as the President of the Volunteer Center of South Jersey. At 21 he was appointed as the youngest community college trustee in the state of New Jersey at Rowan College at Gloucester County (then Gloucester County College) and voted on the partnership agreement with Rowan University, creating Rowan College at Gloucester County. He holds a Master’s degree in Public Administration from Rutgers University – Camden. Cody has dedicated his life to serving his community. As Councilman, Cody has aimed to encourage more shared public services to conserve tax dollars for current and future residents of the township. He was proud to vote on a budget that consisted of a 0% tax increase in 2017 and 2018. He has also worked with the Mayor and Council to curb substance abuse and helped to bring in more businesses to stabilize taxes. He also helped to create the Market-to-Affordable Program in Monroe Township. Cody currently serves as the Chair of the Education Committee, member of the Community Affairs Committee and Public Safety Committee. He is also the liaison to the Monroe Township Board of Education, Municipal Alliance Commission and Historical Society.
Education:
Public Service:
Awards/Recognitions:
Videos:
https://comcastnewsmakers.com/Videos/2017/10/19/nj171018-3
https://www.youtube.com/watch?time_continue=2&v=SN2jKGwQt9E​​
Go to Top